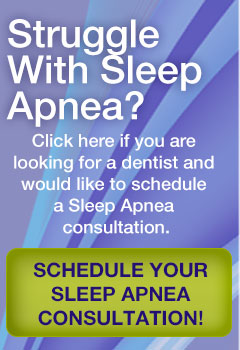 What is sleep apnea?
Sleep apnea is a condition in which your breathing stops periodically during sleep, as often as 20 or 30 times per hour. Each time you stop breathing in your sleep, the resulting lack of oxygen alerts your brain, which temporarily wakes you up to restart proper breathing. Since the time spent awake is so brief, most people with sleep apnea don’t remember it. Many believe they are getting a good night’s sleep, when in fact they are not. The constant wake-sleep, wake-sleep cycle prevents those with sleep apnea from achieving deep sleep, resulting in a constant drowsy feeling during the day.

What are the signs of sleep apnea?
The following symptoms can indicate the presence of sleep apnea. If you notice one or more of these, contact our practice.
Insomnia or difficulty sleeping
Loud snoring at night
Waking up at night short of breath
Snorting or choking sounds during the night (indicating a restart of breathing)
Headaches in the morning
Falling asleep unintentionally during the day
Extreme drowsiness throughout the day

Are there different types of sleep apnea?
Obstructive Sleep Apnea
There are three categories of sleep apnea. The most common is called obstructive sleep apnea (OSA), and occurs due to a physical blockage — usually the collapsing of the soft tissue in the back of the throat. Less common is central sleep apnea (CSA), in which breathing stops because the muscles involved don’t receive the proper signal from the brain. And some people suffer from “mixed” or “complex” sleep apnea, which is a combination of obstructive and central.

The Facts on Snoring and Sleep Apnea
One in two adults snore
One in four adults has sleep apnea
Fewer than 10% have been diagnosed
Obstructive sleep apnea increases risks of:

Your bed patner can lose up to an hour of sleep each night due to your snoring (that’s over 15 days per year!)